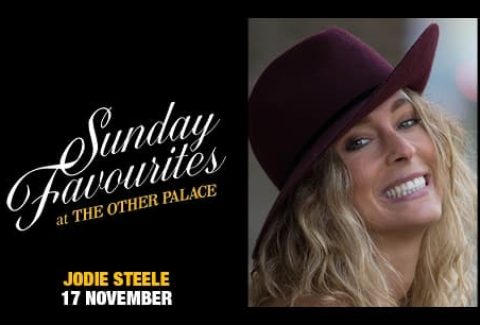 Jodie Steele live at The Other Palace for one night only!
From £42.00
Book Tickets

Following the huge success of the first season of Sunday Favourites at The Other Palace, Lambert Jackson are thrilled to return with another star-filled line-up of intimate West End concerts! Sunday Favourites is designed to bring musical theatre lovers closer to their favourite stars of the West End. With just over 300 seats, the main theatre of The Other Palace is a perfect, beautifully intimate concert space where every seat feels close to the stage and everyone has the perfect view to see West End superstars perform an acoustic show of their favourite songs. Meet and greet options are available.

Jodie Steele is one of the brightest lights to step on stages both on the West End and across the UK in recent years. She is currently starring as ‘Sherrie’ in the UK tour of ‘Rock of Ages’. Prior to this, she played the role of ‘Heather Chandler’ in the hugely successful ‘Heathers: The Musical’ both in the original production at The Other Palace, and in the West End Transfer. Jodie also played ‘Lachesis’ in ‘Myth’ and the wildly coveted role of ‘Elphaba’ in the UK tour of the global sensation ‘Wicked’. Jodie’s other credits include ‘War of the Worlds’ at the Dominion Theatre, ‘Fame’, ‘Jesus Christ Superstar, ‘Legally Blonde’ and ‘Rent’.

Suitable for children 8+ when accompanied by an adult.